Things I Learned from TV: “Priest Holes” in Lovejoy, Father Brown, and Timeless

As a kid, I loved tv shows and movies with secret societies, secret passageways, anything SECRET. Don Diego de la Vega (Guy Williams) had a secret identity and a secret passageway to a stable in Zorro (1957-1959). Johnny Tremain (Hal Stalmaster) was a messenger for a secret society, the Sons of Liberty, who fought against British taxation and tyranny in Johnny Tremain (1957). The Scarecrow of Romney Marsh (1963) depicted the adventures of a secret band of masked smugglers in 18th century Britain, led by a country vicar in scarecrow drag, Dr. Syn (Patrick McGoohan).

When I watched these stories, I was always spellbound, always thrilled. I even got jazzed by an episode of The Dick Van Dyke Show called “Obnoxious, Offensive Egomaniac Etc” (1966), where Rob Petrie (Dick Van Dyke) broke into his boss’s office by means of a hidden passageway behind a bookcase.

Some excitements carry with us into adulthood (if we’re lucky), so I was intrigued to learn later about a special, super-secret hiding place called a “priest hole” on the British TV series Lovejoy (1986-1994). In “The Judas Pair” (1986), antiques dealer Lovejoy (Ian McShane) and Lady Jane Felsham (Phyllis Logan) are hounded by a desperate thief, who uses fire to flush them from a cottage Jane is renovating. When Lovejoy and Lady Jane become trapped by the flames and all appears lost, dealer and decorator hide in a priest hole under the cottage, poking a small opening into an exterior wall for air, thwarting the scoundrel’s plans.


While secret hiding places are fascinating and fun for us now, the history behind priest holes is anything but frivolous. During Queen Elizabeth’s reign in 16th century England, when Protestants and Catholics were trying to sort out their differences (to put it mildly), “priest hunters” scoured the countryside for Catholic priests to imprison or worse. Catholic families built cleverly concealed “priest holes” in fireplaces, basements, and attics to hide priests when the search parties came to call.


While a priest hole helped Lovejoy and Janie survive the fire, the must-have secret room causes all kinds of mischief in “The Ghost in the Machine,” a 2014 episode of the British mystery series Father Brown. By the time unlikely amateur sleuth Father Brown (Mark Williams) solves the mystery of two women who have disappeared via a priest hole, he himself is trapped in the selfsame hiding place. Fear not, however—the prying priest will live to bedevil the local constabulary another day.

The priest hole returns to its original mission of salvation in Timeless (2016-2018), at a celebration in 1944 Nazi Germany no less. In “Party at Castle Varlar” (2016), the intrepid time-traveling team runs into Ian Fleming (Sean Maguire) of James Bond fame, while trying to thwart the latest plan of Garcia Flynn (Goran Višnjic) to pervert history. With the Nazis closing in, the group locks themselves in a study, and historian Lucy Preston (Abigail Spencer) saves the day by discovering a priest hole in the fireplace, which leads to an exit from the castle. 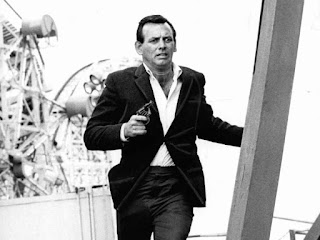