As a child, when I watched Walt Disney’s Wonderful World of Color, I looked forward to the Disneyland episodes, always mesmerized by those spinning teacups. How I yearned to go to Disneyland, wondering if I would ever make it some day. Yes, we had amusement parks near us, such as Paragon Park at Nantasket Beach, outside of Boston, and they contained small wonders of their own, but even at a young age I could see that Disneyland was something special.

In re-watching the blockbuster final episode of The Fugitive, “The Judgment: Part II” (1967), many years later, I saw some scenes of a fabulous amusement park, which appeared to have a nautical theme. More recently I caught an episode of Get Smart, called “The Wax Max” (1968), and I thought the amusement park setting looked the same as on that Fugitive episode. Turns out I was right. A little research unearthed the name of the park, Pacific Ocean Park, which was located in Southern California on the border between Venice and Santa Monica. Boy, am I sorry I missed out on that one.


Pacific Ocean Park, not to be confused with the current Pacific Park, had maritime-themed attractions with some space-age stuff thrown in for good measure. The Park, usually referred to as “P.O.P,” actually gave Disneyland a run for its money for a brief time in the late 50s/early60s. In their song “Amusement Parks U.S.A.,” the Beach Boys mention the two parks in the same breath:

And Disneyland and P.O.P. is worth a trip to L.A.

Some of P.O.P.’s Disneyesque attractions included Ocean Skyway, where visitors could view the ocean from cars suspended above it, Mystery Island Banana Train Ride, where passengers could experience simulated earthquakes and a volcano, Flying Dutchman, similar to Disney’s Pirates of the Caribbean, but without the animatronic characters, and Diving Bells, which submerged passengers into a large tank. P.O.P. also had a hip club, Cheetah, which hosted some bands you may have heard of, including The Doors, The Byrds, and The Beach Boys. Oh, to have been there in those heady days of 60s rock!


Pacific Ocean Park was the setting for more TV shows, including The Invaders, The Man from U.N.C.L.E., The Mod Squad, and Route 66, to name a few. Alas, P.O.P.’s time as a TV location was astonishingly brief, as was the Park’s lifespan, a scant nine years, from 1958 to 1967. An urban renewal project caused street closures near the park, making it difficult for visitors to navigate the area. As attendance dropped, so did revenues. It all ended prematurely and sadly.

On the bright side, I did finally make it to Disneyland at the age of 21, but I was still enough of a kid to be thrilled. I still am. That’s how I know I would have loved Pacific Ocean Park. 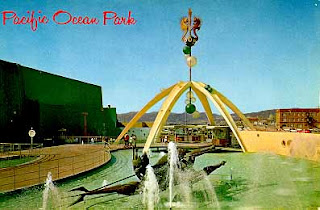